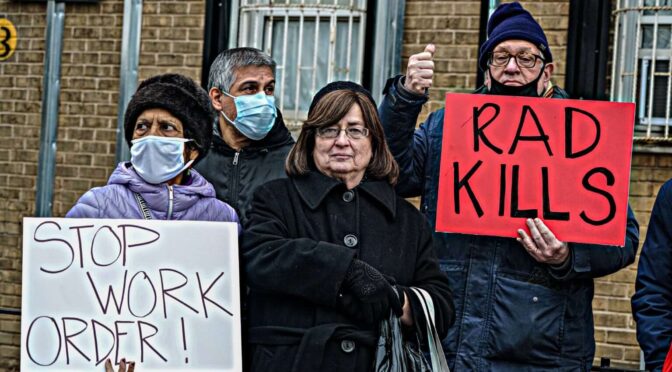 News coverage of a rally organized by residents of Independence Towers, who had recent converted to RAD during the pandemic and wanted a stop work order put in place.

Residents of Williamsburg’s Independence Towers gathered with local politicos for a rally on Monday to demand a halt to ongoing construction at the residential complex due concerns over the porous conditions at the city-run New York City Housing Authority building.

Those residing within Independence Towers claim living conditions at 130 Clymer St. are becoming unbearable since the NYCHA buildings began undergoing construction during the COVID-19 pandemic — something they say is inhumane.

During the construction, they claim to have experienced frequent heat loss, discoveries of mold and asbestos, mounting garbage, hot water shutdowns, among other issues.

In a desperate plea for aid, residents gathered at the corner of Taylor Street and Bedford Avenue on Jan. 11 to rally for support, but even the demonstration was delayed due to an elevator malfunction, forcing elderly attendees to descend numerous flights of stairs. Once the protest got underway, those present exhibited signs reading “Stop work order!” and “RAD Kills.”