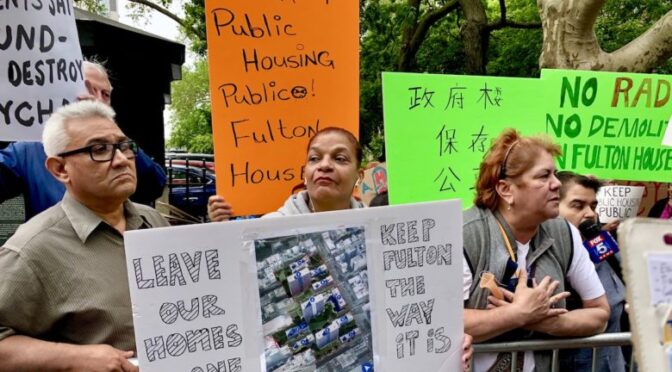 Residents at Fulton Houses fought against RAD conversion for two years, through the pandemic. Here’s why.

Con men know that when one approach fails, it’s time to give the scheme a fancy new name, invest in more public relations and line up shills to sell it. This is often called the “Big Con.” Programs such as Rental Assistance Demonstration, Permanent Affordability Commitment Together, and recently the “Blueprint for Change,” have all been presented by New York City as solutions to a shortfall of funds needed to repair and maintain public housing. All are new names for the same con job — privatization of public housing.

Tenant organizers at the Fulton New York City Housing Authority complex have been fighting privatization plans for 18 months. They have held marches, protests, meetings and speak-outs during spring, summer, winter and fall, explaining to residents what was at stake and demanding much-needed repairs. They have collected 635 signed petitions from heads of households out of the 944 apartments in the complex, explicitly opposing RAD and demanding that public housing remain public.

Last month, Fulton residents heard all their elected representatives recommend privatization as the answer to what should be done for needed repairs at their complex. The politicians had promised tenants help in avoiding privatization.

The plan, unveiled by an advisory body called the “Working Group,” advocates big real estate encroachment on the Fulton campus via building four commercial facilities and four residential buildings where 50 percent of the apartments would be market rate in this high rent, gentrified neighborhood. No guarantees were presented that this will raise funds for desperately needed repairs. There is no transparency concerning where the funding will come from except from some unnamed developers, whose primary interest is in making money, not helping tenants.

At the same time, without tenant consultation, the city is privatizing Fulton, apartment by apartment. Tenants report that when their leases come up for renewal, the new NYCHA lease calls for conversion to Section 8, with no other options offered. Residents have far fewer rights under Section 8 than Section 9 (public housing), and Section 8 is administered by private managers. (section-8-apartments.org)  The City will also be issuing “Tenant Protection Vouchers” which, far from protecting residents and their rights, is part of the process to erode these rights. (nyc.gov).