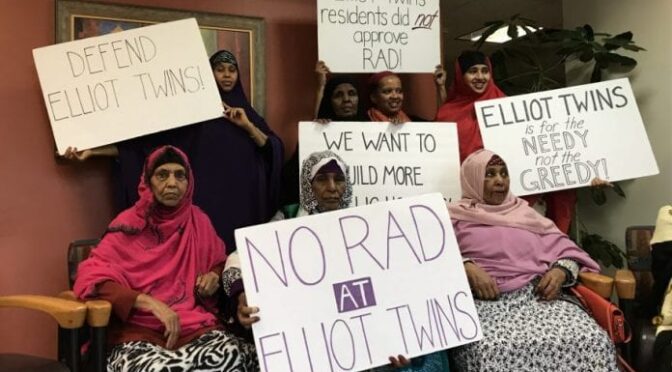 An oped by Lillian M. Ortiz is the managing editor of Shelterforce.

RAD has rules about the rights of tenants, how they should be notified about a potential conversion, their right to return to a property that has converted, and what should happen if they decide to relocate. “But what we see is that … evictions have soared,” says Philip McHarris, a doctoral candidate at Yale University who studies public housing policy, during a recent conversation with Shelterforce. “People have still made complaints around the quality of the repairs. People were supposed to be allowed back into their homes, but they weren’t in some cases. There were rent increases.”

That’s likely because there is little oversight of the program, specifically when it comes to the tenant experience, says Deborah Thrope, deputy director of the National Housing Law Project (NHLP).

“There’s been no major effort on the part of HUD to study the impacts. From an advocate’s perspective, it’s really frustrating,” Thrope says. “Conversions are being pushed through as quickly as possible at the same time PHAs and developers aren’t handing over information fast enough so tenants can catch up with what’s going on. And that leads to inappropriate evictions, and people getting scared and leaving.”

Along with concerns about eviction and the displacement of tenants who live in buildings that have been and are being converted, NHLP has fielded concerns about the suppression of tenant organizing. Organizers have been banned from properties, and meetings have been broken up. Residents have also raised concerns about much-needed maintenance being deferred until a conversion goes through, “which is totally illegal,” says Thrope.

And another issue—the lease terms for some properties that have converted might not be legal, says Thrope. Lease inconsistency across the board could be rectified if HUD were to publish a model lease, which it has not done.

McHarris, who is also an author of The BREATHE Act, a project of the Movement for Black Lives’ 501(c)(4) Electoral Justice Project, says these types of issues are what we should expect when we try to find solutions within the market instead of truly finding a way to fund public housing. One of the focus points of The BREATHE Act is to clear the public housing repair backlogs.

“What we continue to see is that, when things are pushed into the market, [those] market forces tend to create a context of extraction and predatory practices,” says McHarris.

“It requires a shift in how we’re understanding, looking at, and positioning solutions and how they stand in relationship to being centered on people and making sure [they] have housing as opposed to creating context where big businesses and developers can make money in some way.

A Major Change in How RAD is Being Used Today

“How housing authorities are going about doing RAD is changing. But we don’t really know yet what this means for tenants. HUD hasn’t done a major study about the impacts.”