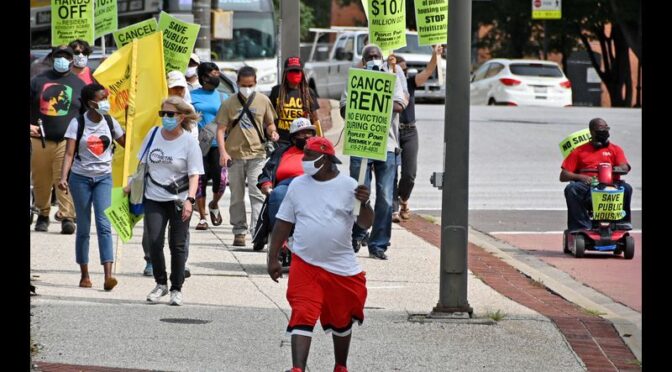 Around 30 people gathered in front of Baltimore’s City Hall Monday afternoon to protest the privatization of the city’s public housing.

The Baltimore People’s Power Assembly, an organization known for its protests against alleged police brutality, hosted the “March and Rally to Save Public Housing.”

The event began with a march from the city’s Douglass Homes in East Baltimore, where the Rev. Annie Chambers, 79, lives in a 1-bedroom apartment. Its first-floor ramp accommodates the wheelchair she uses to get around. A cluster of green potted plants lines the entrance.

Chambers, a retired social worker and one of the protest organizers, listed some of the problems Douglass residents face. There are the strict rules: tenants are banned from placing a grill or a kiddie pool in the courtyard. The lack of upkeep. And above all, there’s the threat of displacement. If that happens, she says “We’ll have more and more homeless families.”