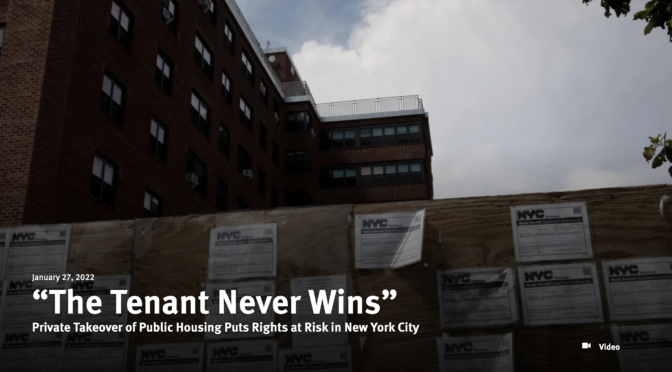 A report that includes surveys with residents on RAD/PACT by Human Rights Watch, a nonprofit that investigates and reports on abuses happening in all corners of the world. We are roughly 450 people of 70-plus nationalities who are country experts, lawyers, journalists, and others who work to protect the most at risk, from vulnerable minorities and civilians in wartime, to refugees and children in need. We direct our advocacy towards governments, armed groups and businesses, pushing them to change or enforce their laws, policies and practices. To ensure our independence, we refuse government funding and carefully review all donations to ensure that they are consistent with our policies, mission, and values. We partner with organizations large and small across the globe to protect embattled activists and to help hold abusers to account and bring justice to victims.

Starting the Fall of 2020, Human Right Watch began exploring the idea of doing a comprehensive study on RAD/PACT in NYC. During the course of 2021, they proceeded to examine data for 6 developments, as well as speak with a number of residents living in public housing and in RAD-converted buildings as part of a larger inquiry into public housing in NYC.

A summary of the report by The City highlights the main findings, which include higher evictions at two of the six developments (Ocean Bay in Far Rockaway Queens and Betances in the Bronx), as well as the loss of protections for tenants overall:

“PACT residents have lost critical protections for their rights and other oversight mechanisms appear inadequate,” the report states. “Perhaps in part due to the reduction in oversight and the program’s financial structure, PACT appears to have created new risks, in certain developments, pertaining to security of tenure.”

While their report wasn’t released until 2022, they put their finding to work in late 2021 penning a letter to US Senate Banking Committee and US House Financial Services Committee in which they not only laid out the findings noted above, but further, called into question whether RAD leads to improvements for residents:

It is also not clear that RAD has led to consistent improvements in the quality of housing. Several residents in RAD-converted developments in New York City reported ongoing issues with the habitability of their homes and with accessing crucial resources. According to one resident, “it feels like a lot of things that they promised they were going to fix were like half-way done.” Some residents described continuing to face issues with mold as well as potentially unsafe construction practices.[8] Some residents also described struggling to find support when they face issues. “I called my social worker [at NYCHA] and she told me that she had nothing to do anymore with this building, and that she could not help me,” one resident said. “Now I don’t have one; I don’t know who to call, or who to help me.”

Furthermore, their letter positions disinvestment in Section 9 Public Housing by Congress in recent decades and “violat[ions] of the human rights of public housing residents” and “urge the Senate Committee on Banking, Housing, and Urban Affairs, the House Committee on Financial Services, and all senators and representatives to provide sufficient funding, under Section 9 of the US Housing Act, to fully close the capital needs backlog of public housing.”

This is remarkable because this is the first time that someone other residents and organizers have truly opposed RAD and called for full funding.