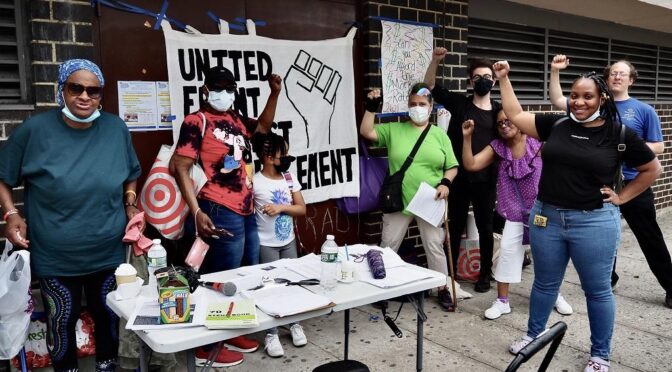 “I think the RAD is very good on paper; that’s really an important preservation program for public housing that preserves a lot of tenants’ rights and long-term affordably of units. But we’ve seen that implantation has been challenging in a number of areas,” said Deborah Thorpe, supervising attorney at the National Housing Law Project. “It’s a new program, right? What was supposed to be a demonstration is now covering almost half of the public-housing stock we have throughout the country, and to date, there have been very few studies and research around the program. A lot of what we do know is anecdotal. Implementation has been challenging in part because it’s this new program that grew in size exponentially and HUD staff doesn’t have the capacity to oversee all these deals.”

Vanessa Walsh, a retired EMT, along with her granddaughter, has lived in the Harlem River Houses since 2013. … Not one to take things lightly, Walsh decided to organize with other residents. Soon after Walsh commenced, residents began to feel pressured by C&C Management to sign a new lease despite their lack of knowledge of what they were signing. Their apartments were selected for random inspections. Walsh received numerous letters and announced visits.

… residents of the Harlem River Houses were alarmed to learn that in 2019 L+M, C&C’s parent company, was ranked as having the second-highest eviction rate in New York City. Since 2017, New York City Marshals have served 529 evictions across all C&C managed properties, with 113 evictions alone occurring at Arverne View (formerly known as Ocean Village), a New York state–subsidized affordable-housing complex; the highest of its entire portfolio. Since C&C took over the management of Arverne in 2012, it has received 2,799 New York City Housing Preservation & Development (HPD) complaints, including 1,172 complaints in just the last three years. Overall, C&C has been cited with 4,713 HPD violations and currently has 613 open violations.

Janine Henderson has lived in Ocean Bay for 27 years, raising her four children there. At first, she welcomed RAD and looked forward to the renovations. But after $560 million in renovations, including a state-of-the-art boiler system, Henderson found that things have gotten worse. Her rent has increased, yet, despite the new boiler system, she said that her apartment was still freezing during the winter, She was forced to buy a space heater to keep her four-year-old granddaughter warm.

“It’s the same old two-step,” she said. “The outside looks beautiful, but they put cheap-ass things in here. All the things that they showed us the apartment would look like—it doesn’t. The shit we got had been refurbished. The refrigerators were shit, excuse my French.”

The National Housing Law Project’s Thorpe contends that RAD is fraught with lax oversight and little tenant involvement, which remains the most persistent barrier to the success of the program.

“We have seen a lot of successful deals, which are typically in places where the community has the resources to put into these conversions. But in a lot of places, it has been problematic because there is no oversight. You need the tenants and advocates at the table monitoring it. If they’re not, a lot can go wrong.”

“Based on the information that has been presented, tenants could face rent increases, evictions, and harassment under RAD.”

Kristen Hackett, a Ph.D. candidate at the CUNY Graduate Center and organizer with the Justice for All Coalition, which is organizing public-housing tenants against RAD, believes the program is a continuation of the federal government’s legacy of racist public-housing policies.

“Today, 90 percent of NYCHA residents are Black or Latinx. These are the descendants of the formerly enslaved and colonized and they don’t find themselves living in public housing by some fluke,” she said. “This is the direct result of ongoing historical processes which disinvest in impoverished and ghettoized neighborhoods and discriminate against and displace and exploit Black and brown lives—for the profit of a wealthy white minority of land grabbers and holders. RAD and other privatization plans for public housing continue these processes.”

Source: Public Housing Is Going Private—and Residents Are Fighting Back – The American Prospect