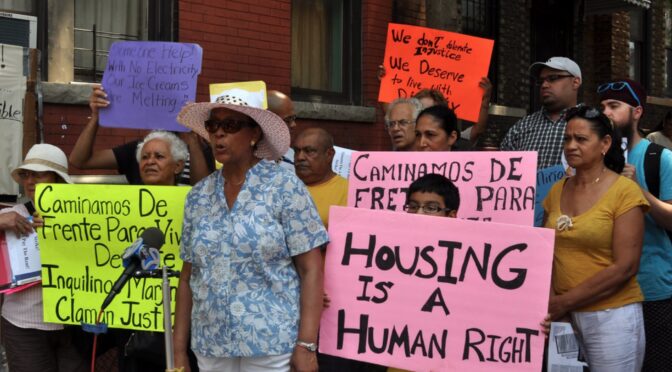 An oped by Jackson Gandour, the 2020-2021 NYU School of Law Fellow at Human Rights Watch.

END_OF_DOCUMENT_TOKEN_TO_BE_REPLACED 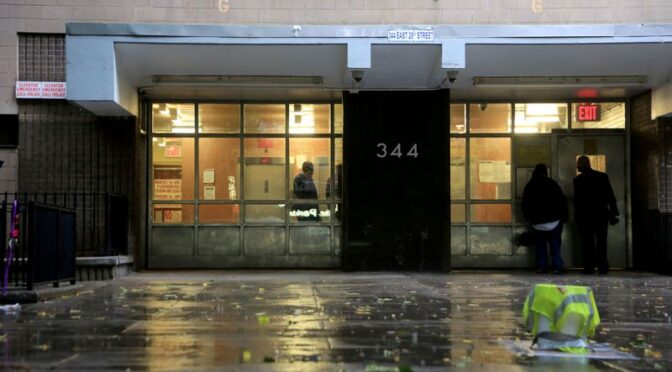 Read one Tenant Association President’s perspective on RAD/PACT conversion at her development.

END_OF_DOCUMENT_TOKEN_TO_BE_REPLACED 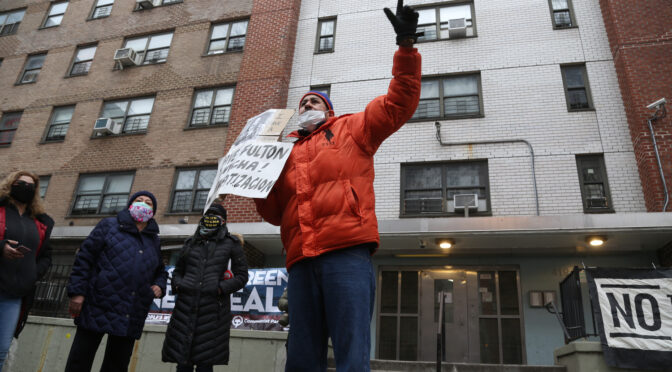 NYCHA Champions the Chelsea Working Group as a success story of robust collaboration between policy makers, elected officials, and public housing residents, but was it?

END_OF_DOCUMENT_TOKEN_TO_BE_REPLACED 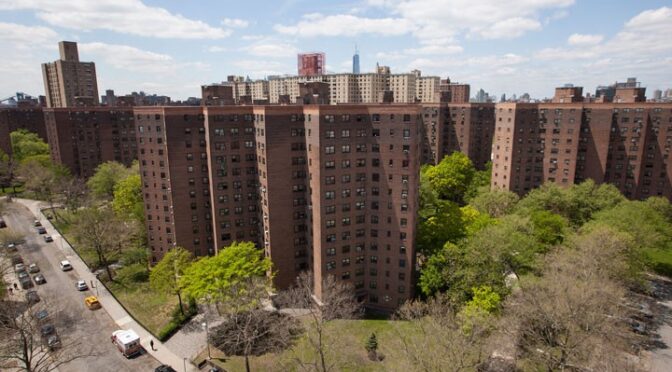 An oped by Jasmin Sanchez is a lifelong NYCHA resident. She is a member of the DSA-AfroSocialist and Socialist of Color Caucus, Movement School — Reclaim Fellow, Sunrise Movement, the Omega Phi Beta Foundation and Movimiento Victoria Ciudadana Diaspora Network.

END_OF_DOCUMENT_TOKEN_TO_BE_REPLACED

Today, public housing in our city, and in the country really, is at a crossroads. Buildings are dilapidated, unsafe and unhealthy to the tune of $40 billion, meanwhile disinvestment has also led to an operating budget deficit. The City has put forth three plans they say will solve these coinciding crises and put NYCHA on a path towards a brighter future. I think these plans will fundamentally change public housing as we know it, and put an important public institution and its tenants in jeopardy going forward.

The three plans are titled NextGeneration NYCHA, NYCHA 2.0, and A Blueprint for Change.

The first, “NextGen”, was proposed by De Blasio in 2015, just a year after winning his first election. This was supposed to be his premier plan for overhauling (some of) NYCHA’s ailing infrastructure and recover (some of) the budget deficit. The central mechanism was “infill”, which is leasing open space on NYCHA campuses – including parking lots and playgrounds – to private developers to build new, mostly market-rate housing. To say this another way, this strategy replaces community resources with housing that will be unaffordable to the existing community.

Tenants have resisted, and this strategy has since been put on ice.

PACT to Preserve is the central strategy of this plan and is foundationally the federal program, Rental Assistance Demonstration, or RAD as its more commonly known. In NYC, RAD is formally called PACT – or Permanent Affordability Community Together – and includes some other mechanisms that together will convert 62,000 units to Section 8, and transfer buildings and units to private management by 2028. The City moved very quickly on this so already about 20,000 units have been or are in the process of being converted.

The City says PACT and RAD will repair buildings and apartments, and improve living conditions for residents because the private managers can tap debtors and financing streams that NYCHA, as a city agency, can not. To say this differently, the City is positioning private developers as the saviors of public housing.

However, RAD conversions across the country have been accompanied by displacement and other hardships for tenants. So far, this is also true for conversions in NYC.

The City piloted RAD at Ocean Bay Houses in Far Rockaway in 2016. Between January 2017 to February 2019, Ocean Bay had the highest rate of eviction of all public housing developments across the city – more than twice the second highest.

Questions have also been raised as to whether tenants are better off. While some are thankful for the repairs, others are finding that they’re waiting longer for repairs than before, and there’s less transparency and accountability.

In addition, tenants lose protections that were won during a 2013 lawsuit against NYCHA. That lawsuit requires the housing authority to robustly respond to and address mold and mildew issues in tenants’ apartments, even requiring that the authority pay to relocate residents if remediation involves construction work. When units and buildings undergo a RAD conversion, this court mandate is terminated.

The third plan, which was just announced at the end of July, is referred to ambitiously as “A Blueprint for Change”. This plan centers around the creation of a new state-level public entity called The Public Preservation Trust. All remaining units and buildings not slated for RAD will be transferred to this public trust through a long-term ground lease. Then, the public trust will hire NYCHA to complete the management responsibilities for all 110,000 units.

What?? Why?? Yes, there is a lot of gymnastics in this plan.

The public trust will be used to secure an alternative voucher from HUD called tenant protection vouchers (TPVs). We don’t need to know too much about these TPVs because they’re not being used for tenants, they’re being used to leverage private capital to pay for repairs. To say this another way, the Public Trust will use a government subsidy to take on billions-of-dollars of debt to make repairs.

What do we think this means for tenants in 10 or 20 years? What future problems does this “solution” create?

Securing the TPVs is further problematic because the strategy for justifying the need to HUD is “obsolescence”. This means that this entire plan is contingent on NYCHA apartments and buildings being in extreme disrepair. This means that this plan is at odds with addressing tenants’ repair needs now.

A main contention around these plans has been the question of whether or not these plans are the privatization of public housing. Many tenants and advocates say yes, but the City continues to say no. The City is so committed to their denial that they are emphasizing their latest plan as a public-to-public transfer. Moreover, with each plan they have consistently highlighted that NYCHA will maintain ownership over the properties; the land is only being leased.

The City’s denial reminds me of the phrase “de facto segregation”, which has been used to refer to the ways in which segregation on the basis of race persists – in our schools, our neighborhoods, employment and more – despite it now being illegal. De facto segregation is segregation “in fact”, rather than by sanction of the law. Segregation doesn’t not exist just because the law says it can’t.

The same is true of these plans. Though legally and technically they do not privatize properties, they are “in fact” privatizatization, or de facto privatization. The leases the city is signing or planning to sign are long-term, in some cases 99 years. This is a lifetime for humans, if we’re lucky. For tenants, in the context of their lives, and even more broadly in the context of the city, this is effectively privatization.

In another opinion piece, I also make the case that these plans are about the financialization of public housing. Each of these plans seeks to reign public housing in, under the control of financial professionals and market logics, practices and processes.

This is dangerous because of how it changes the functional meaning of the housing. These buildings are homes and communities, but as we heard in Russ’ presentation, financial professionals, logics and practices position public housing as an asset portfolio. Assets are vehicles for wealth accumulation; that is their dominant function and it usually trumps other use values, like realizing housing as a home and a place to make a life. This tension is clear in the use of the strategy of obsolescence, which prioritizes pursuing private financing over tenant’s repair needs, and health and safety, really.

Another critical question is whether this is the only way forward. While the City is claiming this is the best they can do, we know that it’s not. Last year, the city decided to allocate $11 billion to build four new jails across the city. At the start of this year, another notorious PBC, the NYCEDC, put forth a plan to spend $14.4 billion for development over Sunnyside Yards in Queens. This comes on the heels of the last Yards project, which we now know routed money away from public housing residents in Harlem. Rather than one instance, this is emblematic of the cumulative effect of the development decisions the city is making.

And these are decisions.

Our elected officials are also willfully not choosing to tax the wealthy. Our state has 119 billionaires. Between March and June, their wealth increased by $77 billion. That is enough money to repair all public housing across the country; and these folks would still be really, really rich. At a national and corporate level, the wealth-hoarding is even worse. If Apple paid its fair share of taxes, it would owe at least $60 billion; when we look at the top 500 largest US companies, that number swells to more than $620 billion.

Tenants can and are already altering the course the city is trying to pursue. The Holmes-Isaac Coalition has formed on the UES, the Justice For All Coalition, of which I am a member, operates out of Queens, The Movement School has pulled together NYCHA tenants from across the city through their Reclaim program, multiple tenant groups emerged from the plans the city outlined for Fulton Houses, and more.

The goal of these tenants is not only to protect their homes, but to build a city-wide movement that protects public housing in perpetuity, and expands it. As many of us know, public housing is a critical resource; without it, many would find themselves without a home, and dislodged from their community. Alternatively, expanding public housing – as the Green New Deal for Public Housing calls for, which is legislation many of these tenants were involved in crafting – may be the only way to truly address the housing crisis facing our city and our country.

This is a crossroads. How this plays out, depends on how we respond, and either way, the consequences will affect us all.

Kristen Hackett is a member of the Justice For All Coalition fighting for just development in Western Queens and a doctoral candidate at The Graduate Center, CUNY. Learn more at https://kristenhackett.info/

Subscribe to EastNewYork.com to stay updated on privatization of NYCHA under the NYCHA News section.

An oped by Norman Siegel and Pedro Wolfe are respectively a civil rights lawyer and a student at Skidmore College.

END_OF_DOCUMENT_TOKEN_TO_BE_REPLACED 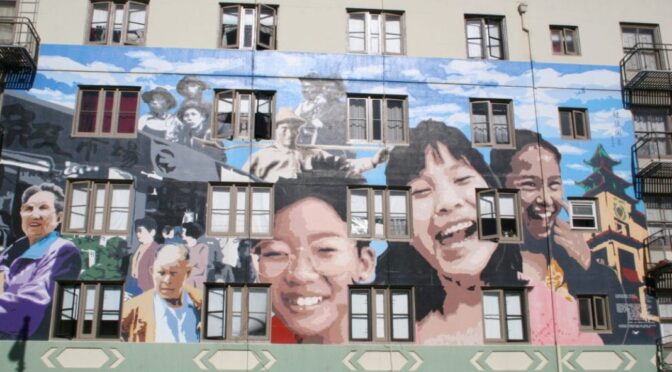